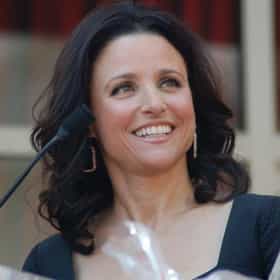 Julia Scarlett Elizabeth Louis-Dreyfus Hall (; born January 13, 1961) is an American actress, comedian, producer, and singer. She is known for her work in the television comedy series Saturday Night Live (1982–1985), Seinfeld (1989–1998), The New Adventures of Old Christine (2006–2010), and Veep (2012–2019). She is one of the most awarded actresses in American television history, winning more Emmy Awards and more Screen Actors Guild Awards than any other performer (eight of the Emmy Awards were for acting, tying Cloris Leachman for the most acting wins). Louis-Dreyfus broke into comedy as a performer in The Practical Theatre Company in Chicago, Illinois, which led to her casting in the ... more on Wikipedia

Julia Louis-Dreyfus is ranked on...

Julia Louis-Dreyfus is also found on...