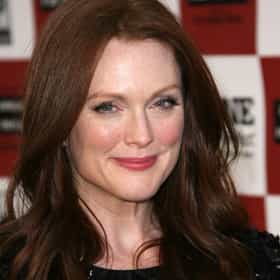 Julianne Moore (born December 3, 1960) is an American actress and children's author. Prolific in film since the early 1990s, she is particularly known for her portrayals of emotionally troubled women in both independent and Hollywood films, and has received many accolades, including an Academy Award and two Golden Globes. Time magazine named Moore one of the 100 most influential people in the world in 2015. After studying theatre at Boston University, Moore began her career with a series of television roles. From 1985 to 1988, she was a regular in the soap opera As the World Turns, earning a Daytime Emmy Award for her performance. Her film debut was in Tales from the Darkside: The ... more on Wikipedia

Julianne Moore is ranked on...

Julianne Moore is also found on...