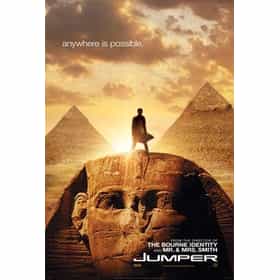 Jumper is a 2008 American science fiction film directed by Doug Liman, loosely based on the 1992 science fiction novel of the same name written by Steven Gould. The film is directed by Doug Liman and stars Hayden Christensen, Jamie Bell, Samuel L. Jackson, Rachel Bilson, Max Thieriot, AnnaSophia Robb, and Diane Lane. The script went through a rewrite prior to filming and the roles for the main characters were changed during production. Jumper was filmed in 20 cities in 14 countries between 2006-07. ... more on Wikipedia

Jumper is ranked on...

Jumper is also found on...