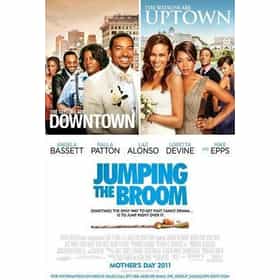 Jumping the Broom is a 2011 American comedy film directed by Salim Akil and produced by Tracey E. Edmonds, Elizabeth Hunter, T.D. Jakes, Glendon Palmer, and Curtis Wallace. The title of the film is derived from the Black American tradition of bride and groom jumping over a ceremonial broom after being married. The film was shot in Blue Rocks, Nova Scotia, standing in for Martha's Vineyard, the setting for the film. TriStar Pictures distributed the film in the United States on May 6, 2011. It was released on DVD and Blu-ray on August 9, 2011. ... more on Wikipedia

Jumping the Broom is ranked on...

Jumping the Broom is also found on...