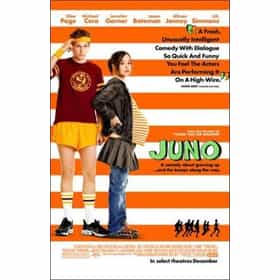 Juno is a 2007 Canadian-American comedy-drama film directed by Jason Reitman and written by Diablo Cody. Ellen Page stars as the title character, an independent-minded teenager confronting an unplanned pregnancy and the subsequent events that put pressures of adult life onto her. Michael Cera, Jennifer Garner, Jason Bateman, Allison Janney, and J. K. Simmons also star. Filming spanned from early February to March 2007 in Vancouver, British Columbia. It premiered on September 8 at the 2007 Toronto International Film Festival, receiving a standing ovation. Juno won the Academy Award for Best Original Screenplay and earned three other Oscar nominations, including Best Picture and Best ... more on Wikipedia

What to Watch If You Love Juno 117 votes Juno told an all too familiar tale when it was released in 2007. The film starred Ellen Page as a pregnant teenager in a com...

Juno is ranked on...

Juno is also found on...