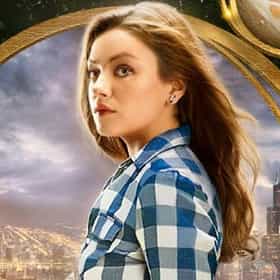 Jupiter Ascending is a 2015 American-Australian space opera film written, produced, and directed by Lana and Andy Wachowski. Starring Channing Tatum and Mila Kunis, the film is centered on Jupiter Jones, a down-on-her-luck cleaning woman, and Caine Wise, an interplanetary warrior who informs Jones that her destiny extends beyond Earth. Supporting cast member Douglas Booth has described the film's fictional universe as a cross between The Matrix and Star Wars, while Kunis named indulgence and consumerism as its underlying themes. The film was co-produced by Grant Hill, who acted as executive producer on The Matrix Reloaded and The Matrix Revolutions and as producer on V for Vendetta, ... more on Wikipedia

Jupiter Ascending is ranked on...

#516 of 630 The Greatest Guilty Pleasure Movies 201.4k VOTES   What makes a film a guilty pleasure? This is a movie that you love to watch, but won't display on your DVD shelf......
#4 of 15 15 Movies With Great Ideas Ruined By Terrible Execution 10.7k VOTES What’s your favorite good bad movie? Everyone has one, be it an adaptation that was botched between the page and t...
#83 of 111 The Best Movies That Pass the Bechdel Test 8.7k VOTES Few movie cliches are more common than the female best friend. What's she like? What are her interests and life goals? Who k...
#1 of 18 Visually Stunning Movies That Are Also Just Trash 34.9k VOTES Have you ever been totally awestruck by the visual splendor of a film, only to realize that the story is straight ...
#402 of 567 The Greatest Sci-Fi Movies of All Time 551k VOTES What are the greatest sci-fi movies of all time? Science fiction films are among the most popular movies in cinematic h...
#46 of 61 The Best New Sci-Fi Movies of the Last Few Years 7k VOTES Modern science fiction movies provide audiences with a wide range of subject matter. The genre offers a lot of flexibil...
#83 of 107 The Best Sci-Fi Movies Of The 2010s Decade 5k VOTES Science fiction fans need to step forward because it's time to vote for the best sci-fi movies of the decade. The ...
The Biggest Box Office Flops Of The 2010s 32.9k VIEWS The millennium is finally moving out of its awkward teen years and into the 2020s, but there are some rough memories that wi...
#13 of 35 The Best Fantasy & Sci-Fi Movies on Netflix 19.9k VOTES The best sci-fi movies on Netflix is a complete streaming list for your perusal. All the good sci-fi and fantasy films on Ne...
#9 of 29 The Very Best Mila Kunis Movies 5.3k VOTES This is a list of the best Mila Kunis movies, ranked best to worst - with movie trailers when available. Mila Kunis first ca...
#33 of 35 The Greatest Guilty Pleasure Action Movies 939 VOTES Given it's an inherently cheesy genre, all action films are kind of guilty pleasures. However, the corny action fi...
#32 of 37 The Best Channing Tatum Movies 7.8k VOTES List of the best Channing Tatum movies, ranked best to worst with movie trailers when available. Who knew that Channing Tatu...
#36 of 36 The Best Reincarnation Movies 1.6k VOTES A list of the best reincarnation movies ever made, ranked by movie fans with film trailers when available. This reincarnatio...
#28 of 48 The Best Space Adventure Films 305 VOTES The greatest space adventure films provide audiences with a sense of wonder. They take us to new worlds that offer thrills a...
#65 of 100 Movies Turning 5 In 2020 414 VOTES Let's take a short walk down memory lane to look back at the movies released in 2015. Believe it or not, they turn five...
#5 of 36 The Best James D'Arcy Movies 109 VOTES This list will determine the best James D’Arcy movies. He is most likely known for his role as Edwin Jarvis in the series Ag...

Jupiter Ascending is also found on...

Movies with Cinematography by John Toll