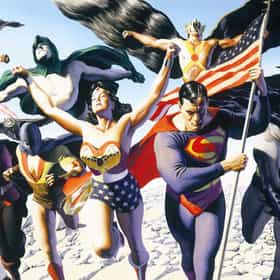 Justice is a twelve-issue American comic book limited series published bimonthly by DC Comics from August 2005 through June 2007, written by Alex Ross and Jim Krueger, with art also by Ross and Doug Braithwaite. Its story involves the superhero team known as the Justice League of America confronting the supervillain team the Legion of Doom, after every supervillain is motivated by a shared dream that seems to be a vision of the planet's destruction which they intend to avoid. ... more on Wikipedia

Justice is ranked on...

#2 of 20 The 20 Most Stunning Pieces of Art in Comics 2.1k VOTES Since they first came to prominence in the 1930s, comic books have been viewed as something for kids, not as a medium that c...

Justice is also found on...