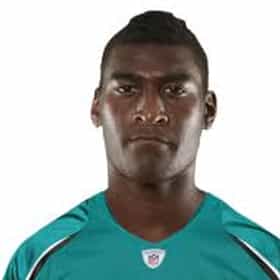 Justin Carl Blackmon (born January 9, 1990) is an American football wide receiver for the Jacksonville Jaguars of the National Football League (NFL). He played college football at Oklahoma State, where he was recognized as a consensus All-American twice. He was drafted by the Jaguars fifth overall in the 2012 NFL Draft. After playing a full rookie season with the Jaguars, he was suspended for the first four games of 2013 for violations of the NFL's substance abuse policy. He was suspended indefinitely for another violation in November 2013, and has not played a game since. ... more on Wikipedia

Justin Blackmon is ranked on...