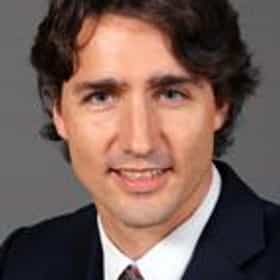 Justin Pierre James Trudeau (; French: [ʒystɛ̃ tʁydo]; born December 25, 1971) is a Canadian politician who has served as the 23rd prime minister of Canada since 2015 and leader of the Liberal Party since 2013. Trudeau is the second-youngest Canadian Prime Minister after Joe Clark; he is also the first to be related to a previous holder of the post, as the eldest son of Pierre Trudeau.Born in Ottawa, Trudeau attended Collège Jean-de-Brébeuf, graduated from McGill University in 1994, and then the University of British Columbia in 1998. He has a bachelor of arts degree in literature and a bachelor of education degree. After graduating, he worked as a teacher in Vancouver, ... more on Wikipedia

Justin Trudeau is ranked on...

#207 of 571 Things That Are Not As Cool As People Think They Are 1.1M VOTES Jorts are the dumbest things I've ever seen. Next to Toms shoes. Next to the Toyota Prius. Next to d-bags taking pictures of...
#16 of 111 Famous Politicians You'd Want to Have a Beer With 135.6k VOTES Which likable politicians would be fun to have a few drinks with? Many politicians market themselves as regular folks you'd ...
#174 of 348 Popular Things You're Just Not Interested In 184k VOTES Face it, when it comes to solid taste, majority doesn't always rule. It's time to take a good long look at popular thin...
#86 of 128 Celebrities You'd Let Babysit Your Kid 66.9k VOTES Parents need to be extra careful when choosing a babysitter for your children, and picking a celebrity babysitter invol...
#96 of 140 Celebrities Who Are Great To Sit Next To On A Long Flight 40.6k VOTES The person you sit next to on a long plane flight significantly affects your traveling experience. Sitting next to...
#18 of 40 40 Adorable Throwback Pictures Of Your Favorite Heartthrobs 45.6k VOTES You know them: the hottest men on the planet. Clooney, Pitt, Beckham. The men who make hearts race worldwide. These top...
#145 of 165 If You Fought To The Death, Who Would You Want By Your Side? 71k VOTES Fighting to the death. You know you’ve thought about it; pop culture has definitely made you consider it. In the e...
#5 of 51 The Most Important Politicians Of 2019 17.4k VOTES Voting is an integral part of any democracy. And now, you have the power to vote for the individuals you believe to be the m...
#30 of 60 Celebrities Who Would Help You Out In A Pinch 11.8k VOTES Though celebrities possess millions of dollars, luxurious homes, and a team of assistants, there are some celebs (...
#2 of 29 The Hottest Male World Leaders 106.4k VOTES Do you ever find yourself getting all hot and bothered while watching heated UN debates? Have you ever found yourself fantas...
#25 of 29 29 Celebrities Who Have Shown Up In Comic Books 2.8k VOTES Famous people have made comic book cameos almost as long as comics have been on sale. Comics are a fantastic medium for a ...
#15 of 41 The Most Influential People in 2018 29.6k VOTES From Oscar winners and musicians to political figures and activists, this list compiles the most influential people of ...
#10 of 12 These Celebrity Spotify Playlists Give Listeners A Peek At What Their Faves Are Jamming To 227 VOTES Spotify has made it easier than ever for users to compile and share playlists of their favorite songs. What's more,&nbs...
#37 of 38 Who Do You Think Is Really Making Decisions In The White House? 2.4k VOTES On August 13, 2018, former White House aide Omarosa Manigault Newman released a recording of President Trump reacting t...
#2 of 21 Who Should Be Named TIME's Person Of The Year For 2017? 6k VOTES UPDATE: On December 6, 2017, Time announced "The Silence Breakers" of the #MeToo Movement as the 20...
19 World Leaders Who Have Tattoos 165.4k VIEWS Tattoos are much more accepted nowadays than they used to be. In the past, tattoos had a certain negative connotation associ...
Famous People Named Justin 42.3k VIEWS List of famous people named Justin, along with photos. How many celebrities named Justin can you think of? The famous Justin...
The Many Famous Friends of Emma Watson 1.4k VIEWS For many people, Emma Watson has had a presence in their lives for years. She starred as Hermione Granger in the Harry Potte...
Celebrities Born On Christmas Day 36.4k VIEWS Here are all the famous people who were born on December 25th, Christmas Day. Featuring actors, musicians, singers...

Justin Trudeau is also found on...