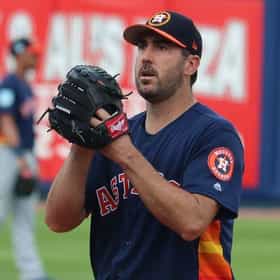 Justin Brooks Verlander (born February 20, 1983) is an American professional baseball pitcher for the Houston Astros of Major League Baseball (MLB). He has also played in MLB for the Detroit Tigers. From Manakin-Sabot, Virginia, Verlander attended Old Dominion University (ODU) and played college baseball for the Monarchs. He broke the Monarchs' and Colonial Athletic Association's career records for strikeouts. At the 2003 Pan American Games, Verlander helped lead the United States national team to a silver medal. The Tigers selected Verlander with the second overall pick of the 2004 MLB draft. He made his major league debut with the Tigers in 2005, and played there for 12 years as the ... more on Wikipedia

Justin Verlander is ranked on...

#170 of 620 The Greatest Baseball Players Of All Time 515.9k VOTES This greatest baseball players list represents the combined lists of baseball fans everywhere. Anyone can make their own lis...
#8 of 286 People who voted for Justin Verlander... People in the Midwest are 2x more likely to vote for this The Top Current Baseball Players 219.5k VOTES Who do you think should make the list of the best current players in baseball? Ranked by fans, critics, and sports analysts,...
#53 of 218 The Greatest Relief Pitchers of All Time 25.7k VOTES The greatest relief pitchers of all time include some of the best current MLB players, as well as some legends who are alr...
#23 of 25 The Most Hated Players In Baseball Right Now 1.2k VOTES This is a list of the most hated players in baseball right now! To be one of the most hated current baseball players, you ac...
#3 of 41 Who Will Win the 2019 American League MVP? 1.6k VOTES The group of candidates for who will win AL MVP in 2019 is full of the usual suspects. The best players in baseball alw...
#521 of 868 Celebrity Death Pool 2016 370.1k VOTES Celebrity death pool 2016: Here's a large list of celebrities we think just might die this year. The only certainties in l...
#11 of 19 Every Pitcher With 300 Strikeouts In A Season 969 VOTES Every pitcher with 300 strikeouts in a season is part of an elite club. Throughout the history of MLB, only 19 pitchers...
#21 of 50 The Most Likable Active MLB Players 1k VOTES Batter up! This is the list of the most likable MLB players currently in the league. Major League Baseball has 162 game...
#2 of 50 Who Will Win The 2020 American League Cy Young Award? 850 VOTES While everyone in baseball wants to win a World Series, the best pitchers in the league will all be competing for the 2...
#5 of 50 The 50 Most Valuable MLB Players For Fantasy Baseball In 2019 4.1k VOTES Opening Day 2019 is around the corner, and while MLB managers focus on setting their roster and choosing an opening day...
#20 of 28 Who Will Be The 2017 American League MVP? 3.4k VOTES Every year, the MLB names one player as the American League MVP, for the one player who truly stepped up to the plate, ...
#2 of 42 The Most Likely 2013 MLB All Stars 3.2k VOTES The most likely 2013 MLB All-Stars are those best players in the MLB today from the National League and the American League ...
#12 of 41 The Best MLB Starting Pitchers of 2014 727 VOTES Who is the best MLB starting pitcher of the 2014 season? This list includes pitchers from teams in both the American and Nat...
#12 of 112 The Best Houston Astros of All Time 20.1k VOTES This is a list of the best Houston Astros ever. Originally called the Colt .45s, the Houston Astros had been a mainstay in t...
Famous People Named Justin 43.1k VIEWS List of famous people named Justin, along with photos. How many celebrities named Justin can you think of? The famous Justin...
Celebrities Who Have Been Hacked 563.7k VIEWS This list contains information about celebrities who have been hacked, loosely ranked by fame and popularity. Several famous...

Justin Verlander is also found on...