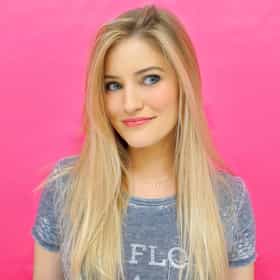 Justine Ezarik ( ee-ZAIR-ik; born March 20, 1984) is an American YouTube personality, host, actress, and model. She is best known as iJustine, with over a billion views across her YouTube channels since 2006. She gained attention as a lifecaster who communicated directly with her millions of viewers on her Justin.tv channel, ijustine.tv. She acquired notability in roles variously described as a "lifecasting star", a "new media star", or one of the Web's most popular lifecasters. She currently posts videos on her main channel iJustine.Ezarik became known for her "300-page iPhone bill", which followed the first month of service after the introduction of the ... more on Wikipedia

Every Man Justine Ezarik Has Dated 395 views She is a YouTube star who has found success in reviewing Apple products, so it wouldn’t be surprising if there were a lot of...

iJustine is ranked on...

#460 of 571 Things That Are Not As Cool As People Think They Are 1.1M VOTES Jorts are the dumbest things I've ever seen. Next to Toms shoes. Next to the Toyota Prius. Next to d-bags taking pictures of...
#36 of 93 The Greatest Vloggers of All Time 42k VOTES Here are the best YouTube vloggers aka video bloggers. What's a vlogger? Well, anyone with a YouTube channel has the ch...
#25 of 38 The Best Gamer Girls On YouTube 13.7k VOTES While gaming is sometimes seen as a traditionally male arena, these famous gaming girls are truly shattering that assumption...
#13 of 32 The Best Tech Reviewers On YouTube 9.6k VOTES Technology is constantly evolving, and the people behind the best YouTube tech channels are often the first people to inform...
#15 of 29 The Best DIY Channels on YouTube 2.3k VOTES As helpful as they are entertaining, DIY YouTubers are a staple of the YouTube world. Famous for their remarkably handy...
#4 of 29 The Best Unboxing Channels On YouTube 1.4k VOTES Everyone loves getting a package stocked with exciting goodies, so it's no surprise so many viewers love to live v...

iJustine is also found on...