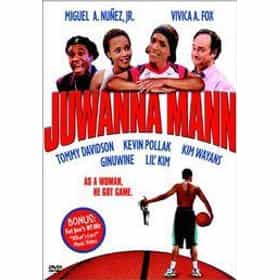 Juwanna Mann is a 2002 American sports romantic comedy film directed by Jesse Vaughan. The film stars Miguel A. Núñez, Jr. as Jamal Jeffries, a basketball star becoming a female impersonator joining women's basketball, after being banned from men's basketball. In addition to being able to play the sport he loves, he also does it to become romantically involved with a lovely player. The film also stars Vivica A. Fox, Kevin Pollak, Tommy Davidson, Kim Wayans, Ginuwine, and J. Don Ferguson. The movie is written by Bradley Allenstein and produced by Bill Gerber. The movie opened in theaters on June 21, 2002. The movie was filmed in Charlotte, North Carolina, at the Charlotte ... more on Wikipedia

Juwanna Mann is ranked on...

Juwanna Mann is also found on...