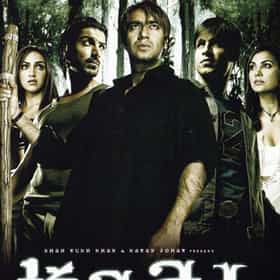 Kaal also known as Kaal: The Jungle is a Bollywood natural horror film directed by Soham Shah, and produced by Karan Johar & Shahrukh Khan. The film stars Ajay Devgan, John Abraham, Vivek Oberoi, Esha Deol and Lara Dutta in lead roles. It released on 29 April 2005. The story relates the struggle of wildlife expert Krish Thapar, his wife Riya Thapar and a group of friends, who battle against a ghost in the fictional Orbit National Park for their lives. The film sends out the message on protecting the precious wildlife of India. ... more on Wikipedia

Kaal is ranked on...

Kaal is also found on...