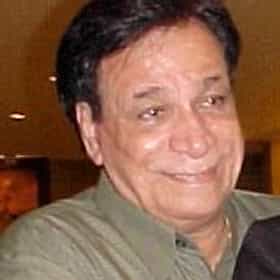 Kader Khan (Pashto: قادر خان‎ Qâder Xân; 22 October 1937 – 31 December 2018) was an Indian-Canadian film actor, screenwriter, comedian, and director. As an actor, he appeared in over 300 films after his debut film in the 1973 film Daag, starring Rajesh Khanna, in which he acted as a prosecuting attorney. He was also a prolific screenwriter for Bollywood films in the period 1970s to 1999 and wrote dialogues for 200 films. Khan graduated from Ismail Yusuf College affiliated to Bombay University. Before entering the film industry in the early 1970s, he taught at M. H. Saboo Siddik College of Engineering, Mumbai, as a professor of Civil Engineering. ... more on Wikipedia

Kader Khan is ranked on...

Famous People Whose Last Name Is Khan 15.6k VIEWS Being a fairly common name, it's no surprise there are a lot of famous people with the last name Khan. Do you recognize all ...

Kader Khan is also found on...