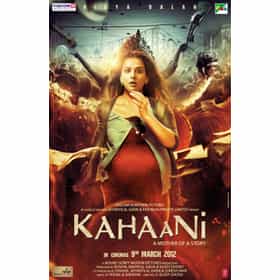 Kahaani is a 2012 Indian mystery thriller film directed and co-produced by Sujoy Ghosh. It stars Vidya Balan as Vidya Bagchi, a pregnant woman searching for her missing husband in Kolkata during the festival of Durga Puja, assisted by Satyoki "Rana" Sinha and Khan. Made on a shoestring budget of 80 million, Kahaani was conceived and developed by Ghosh, who co-wrote the film with Advaita Kala. The crew often employed guerrilla-filmmaking techniques on Kolkata's city streets to avoid attracting attention. The film was noted for its deft portrayal of the city and for making use of many local crew and cast members. Kahaani explores themes of feminism and motherhood in ... more on Wikipedia

Kahaani is ranked on...