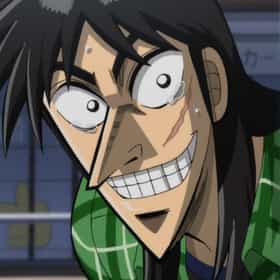 Tobaku Mokushiroku Kaiji, also known as Ultimate Survivor Kaiji, is a Japanese manga series about the art of gambling, written by Nobuyuki Fukumoto. It is published by Kodansha in Young Magazine. The first part of the manga, was adapted as a 26-episode anime television series called Gyakkyō Burai Kaiji: Ultimate Survivor, which began airing October 2007. A live-action 'Kaiji' movie was released October 10, 2009 in Japan with Tatsuya Fujiwara playing the role of Kaiji. Tobaku Mokushiroku Kaiji is considered Fukumoto's most famous work, and is well known in both Japan and Korea. In 1998, it was the winner of the Kodansha Manga Award in the General category. A second anime television ... more on Wikipedia

Kaiji is ranked on...

#320 of 891 The Best Anime Series of All Time 5.7M VOTES You love anime but what tops this list of the best anime series ever made? Top anime series include shows like Death Note, A...
#37 of 58 The Best Seinen Anime & Manga Series 54.6k VOTES Here is Ranker's list of the best seinen anime and manga, with help from voters like you. Just so everyone is clear, seinen ...
#110 of 120 The Best Anime on Crunchyroll 611.4k VOTES It's the premiere anime streaming service, but what are the best anime shows on Crunchyroll? Sure you can watch on Netf...
#16 of 20 The 20 Best Survival Anime of All Time, Ranked 1.5k VOTES All good anime plots have something important at stake - but in survival anime, what's at stake is life itself. In these sho...
#5 of 13 The 13 Best Anime About Gambling 852 VOTES Gambling may not be the most common subject for anime to address, but when it does come up, it makes for some fascinating st...
#20 of 23 The Best Anime Like Initial D 271 VOTES Even if you're not that big of an anime fan, Initial D is perfect for anyone who's simply in love with cars. Following the s...
#16 of 17 Anime Series That Are Way Too Smart For Kids 4.8k VOTES When you're a kid, it's usually a safe bet to assume that most animated media is for you. Sure, adult cartoons like Sou...
#20 of 20 The Best Anime Like Yu-Gi-Oh! 707 VOTES The legendary anime series Yu-Gi-Oh! captured our hearts when it premiered in the late '90s, but what are some similar serie...
#18 of 18 The 16+ Best Survival Game Anime 22.6k VOTES List of the best survival game anime, voted on by Ranker's anime community. If you're looking for movies and shows like The ...