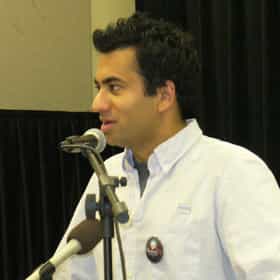 Kalpen Suresh Modi (born April 23, 1977), known professionally as Kal Penn, is an American actor, comedian, producer, and former civil servant. As an actor, he is known for his role portraying Lawrence Kutner on the television program House, as well as the character Kumar Patel in the Harold & Kumar film series. He is also recognized for his performance in the film The Namesake. Penn has taught at the University of Pennsylvania in the Cinema Studies Program as a visiting lecturer. In April 2009, Penn joined the Obama administration as an Associate Director in the White House Office of Public Engagement. This necessitated that his TV character, Lawrence Kutner, be written out of ... more on Wikipedia

Kal Penn is ranked on...

#32 of 54 The Best Asian American Actors And Actresses In Hollywood 5.3k VOTES While it has seen some controversy over the years, diversity in Hollywood has long been part of its rich history. And while ...
#48 of 85 The Biggest Asian Actors In Hollywood Right Now 7.4k VOTES As the film and TV industry grow in diversity, who do you think are the biggest Asians in Hollywood right now? While plenty ...
#56 of 61 Celebrities You Want On Your Trivia Team 8.9k VOTES It’s easy to assume celebrities are not very intelligent and that they are just beautiful people reciting lines for our ente...
Celebrities You Didn't Know Use Stage Names 1.7M VIEWS List of celebrities with stage names, loosely ranked according to fame and popularity. It's tough to break into show busin...
Actors Who Asked To Have Their Characters Killed Off TV Shows 49.5k VIEWS When a beloved character perishes on a TV show, fans go through an array of emotions. Shock. Confusion. Disappointment. Ange...
31 Actors Who Went Into Politics 18.1k VIEWS List of Actors Who Went Into Politics Ranked by Fame and Popularity. It seems that every actor has an opinion about politics...
10 Actors Who Actually Requested To Have Their Characters Written Out Of Popular Franchises 120.1k VIEWS The death of a beloved character in a television show or film franchise can be a jarring blow for fans, but is often especia...
#7 of 23 The Funniest Indian Comedians of All Time 2.2k VOTES This list contains information about the best Indian comedians, loosely ranked by user votes. The best Indian comedians co...
30+ Famous People of Indian Descent 109.8k VIEWS This list of famous people of Indian descent is loosely ranked by fame and popularity. Many famous celebrities are of Indian...
Male Celebrities Who Are 5’10" 24.7k VIEWS This list contains examples of male celebs who are 5'10" loosely ranked by fame and popularity. Standing above the aver...

Kal Penn is also found on...