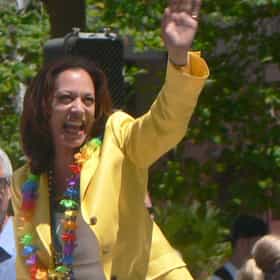 Kamala Devi Harris ( KAH-mə-lə; born October 20, 1964) is an American lawyer and politician serving as the junior United States Senator from California since 2017. A member of the Democratic Party, she previously served as the 27th District Attorney of San Francisco from 2004 to 2011 and 32nd Attorney General of California from 2011 until 2017. She is a candidate for the Democratic nomination for President of the United States in the 2020 election. Harris was born in Oakland, California and is a graduate of Howard University and University of California, Hastings College of the Law. In the 1990s, she worked in the San Francisco District Attorney's Office and the City Attorney of San ... more on Wikipedia

Kamala Harris is ranked on...

#88 of 223 Lying Politicians: The Worst Liars In American Politics 432.8k VOTES Do any politicians tell the truth anymore? Maybe, but you won't find them here. This list has the least trustworthy people i...
#29 of 95 The Most Influential Women of 2019 50.1k VOTES UPDATED: Check out the most influential women of 2020! From inspirational female celebrities to businesswomen to political...
#82 of 114 Famous Politicians You'd Want to Have a Beer With 136.1k VOTES Which likable politicians would be fun to have a few drinks with? Many politicians market themselves as regular folks you'd ...
#31 of 104 The Most Annoying Politicians Currently in Office 85.2k VOTES Annoying politicians are a fact of life in these United States. In a time when the gulf between the two major parties has ne...
#43 of 51 The Most Important Politicians Of 2019 17.6k VOTES Voting is an integral part of any democracy. And now, you have the power to vote for the individuals you believe to be the m...
#22 of 55 The Most Influential Women Of 2020 1.2k VOTES In 2020, inspirational female leaders are found in every aspect of business, philanthropy, politics, and entertainment. Some...
Famous People Whose Last Name Is Harris 9k VIEWS Being a fairly common name, it's no surprise there are a lot of famous people with the last name Harris. Do you recognize al...
All The 2020 Democratic Candidates' First Jobs 3.8k VIEWS Right now, they all have one job in mind: President of the United States. But like everyone else, their ambitions - and thei...
Celebrities Who Are Half-Black And Half-Indian 102 VIEWS This is a list of half Black half Indian celebrities, ranked loosely by fame and popularity. There are many successful celeb...

Kamala Harris is also found on...