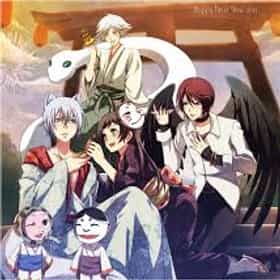 Kamisama Kiss is a Japanese manga series written and illustrated by Julietta Suzuki. An anime adaptation has been produced by TMS Entertainment and directed by Akitaro Daichi and began airing in October 2012. Nanami Momozono dreams of living an average school life just like any other high school girl does. Instead, she must cope up with the fact that her father, who is a constant gambler, has accumulated a bunch of gambling debts on her. ... more on Wikipedia

Kamisama Kiss is ranked on...

#50 of 131 The Best Fantasy Anime of All Time 386.6k VOTES From classics like Wolf's Rain to newer series like Sword Art Online, fantasy is one of the most popular genres of anime. Th...
#124 of 306 The 100+ Best Anime Intros of All Time 353.2k VOTES Awesome anime intros are often just as important as the series themselves. All those visual cues help viewers remember where...
#4 of 260 The Best Romance Anime Ever Made 832k VOTES It's time to get in touch with your emotional side, as we're ranking the top romance anime that has ever been made. These sh...
#25 of 46 Which Anime Universe Would You Want To Live In? 79k VOTES The diverse world-building in anime makes choosing a universe to live in an almost impossible decision, but this list o...
#2 of 28 The Best Anime Like Yona of the Dawn 1.2k VOTES A sheltered princess since birth, Yona has always thought her kingdom, Kouka, to be a peaceful one. But when her belove...
#31 of 121 The 100+ Best Anime Streaming On Hulu 194k VOTES Here is the list of the best anime streaming on Hulu, as determined by anime fans like you. Hulu has quite an expansive coll...
#10 of 77 The Best Romance Manga of All Time 20.2k VOTES Although the term "romance manga" is very broad, we still want you to rank your favorites. What are the best roman...
#1 of 13 The 13 Best Supernatural Romance Anime 12.5k VOTES Sometimes, it's not enough for anime characters to fall in love in an everyday setting. Sometimes, you want a little more ex...
#24 of 79 The Best Harem Manga of All Time 17.8k VOTES If there's one type of character you should be jealous of, it's the main character of a harem manga. He's surrounded by beau...
#24 of 119 The Funniest Anime Shows Ever Made 184.4k VOTES List of the funniest anime of all time, as voted on by the Ranker anime community. Although many great animes have comedy el...
#1 of 20 The 20 Best Anime About Yokai 2.2k VOTES Yokai is a Japanese term that refers to spirits, demons, and other supernatural beings from Japanese folklore. Some of them ...
#23 of 85 The Best Fantasy Anime on Hulu 3.1k VOTES If you have a Hulu subscription and love fantasy anime, we have some fantastic news! Hulu has a ton of good fantasy ani...
#15 of 24 The Best Anime Like Tokyo Ravens 449 VOTES Need some Tokyo Ravens anime recommendations? Since it's such a fun series, let's rank the best anime like To...
#1 of 30 The Best Anime Like Vampire Knight 1.9k VOTES Need some Vampire Knight anime recommendations? Since it's such a great series, let's rank the best anime lik...
#9 of 13 The Best Anime Like 'Natsume's Book of Friends' 487 VOTES Natsume's Book of Friends is a well-loved anime series about a teenage boy named Natsume who can see yokai - demonic sp...
#3 of 29 The Best Gods Anime 9.6k VOTES List of the best gods anime, voted on by Ranker's anime community. This may not be the most popular genre of Japanese animat...
#1 of 13 The Best Anime Like Fruits Basket 2k VOTES Fruits Basket came out in 2001, and quickly established itself as one of the most popular shoujo anime of its era. It follow...
#1 of 12 The Best Anime Like Noragami 1.2k VOTES Just finished binge-watching Noragami and need a new anime like Noragami to watch? Then you need to see these...