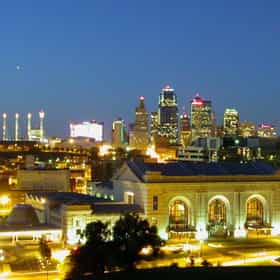 Kansas City or K.C. is a city of 466,600 people. It is the 37th largest city by population in the United States and the 23rd largest by area. It is the central city of the Kansas City metropolitan area, which spans the Kansas–Missouri border. It was founded in the 1830s as a Missouri River port. Originally called Kansas, this became confusing upon the establishment of Kansas Territory in 1854. The name Kansas City was assigned to distinguish the two. Sitting on Missouri's western border, with downtown near the confluence of the Kansas and Missouri Rivers, the modern city encompasses 316 square miles in Jackson, Clay, Cass, and Platte counties. It is one of Jackson County's two county ... more on Wikipedia

Kansas City is ranked on...

Kansas City is also found on...