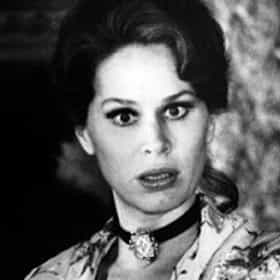 Karen Blanche Black (née Ziegler; July 1, 1939 – August 8, 2013) was an American actress, screenwriter, singer, and songwriter. She rose to prominence for her work in various independent films in the 1970s, frequently portraying eccentric and offbeat characters, and subsequently established herself as a figure of New Hollywood. Her career spanned over 50 years, and includes nearly 200 credits in both independent and mainstream films. Black received numerous accolades throughout her career, including two Golden Globe Awards, as well as an Academy Award nomination for Best Supporting Actress. A native of suburban Chicago, Black studied theater at Northwestern University before ... more on Wikipedia

Karen Black is ranked on...

#298 of 925 People We Wish Were Still Alive 3.3M VOTES RIP to our world's greatest achievers, those who changed the way we live and the ways we thought. This list of people we wis...
#865 of 2,003 The Greatest Actors & Actresses in Entertainment History 1.7M VOTES The best actors and actresses of all time, male and female, ranked by film fans worldwide. This list of greatest actors and ...
#128 of 312 Which Actor Would You Bring Back for One Final Movie? 189.9k VOTES We asked, you answered. Fans of the Ranker Facebook page chose which dead actors they’d like to bring back to life for just ...
Every Person Who Has Hosted 'Saturday Night Live' 52.1k VIEWS Live from New York! It's Saturday Night! This is a list of all Saturday Night Live hosts, in reverse order,...
Actors Who Died in 2013 12.3M VIEWS This list of famous actresses and actors who died in 2013 commemorates the stars that we lost that year. It includes all act...
Famous People Whose Last Name Is Black 23k VIEWS Being a fairly common name, it's no surprise there are a lot of famous people with the last name Black. Do you recognize all...

Karen Black is also found on...