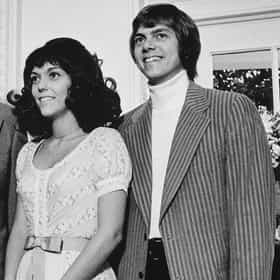 Karen Anne Carpenter (March 2, 1950 – February 4, 1983) was an American singer and drummer who was part of the duo the Carpenters alongside her brother Richard. She was praised for her contralto vocals, and her drumming abilities were viewed positively by other musicians and critics. Her struggles with eating disorders would later raise awareness of anorexia and body dysmorphia. Carpenter was born in New Haven, Connecticut, and moved to Downey, California, in 1963 with her family. She began to study the drums in high school and joined the Long Beach State choir after graduating. After several years of touring and recording, the Carpenters were signed to A&M Records in 1969, ... more on Wikipedia

Karen Carpenter is ranked on...

Karen Carpenter is also found on...