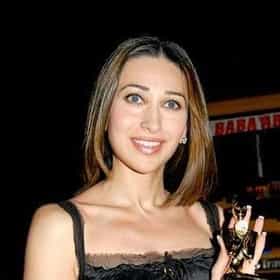 Karisma Kapoor (born 25 June 1974) is an Indian film actress. One of the most popular and highest-paid Hindi film actresses in the 1990s and early 2000s, Kapoor is the recipient of several accolades, including a National Film Award and four Filmfare Awards. Born and raised in Mumbai, Kapoor is a member of the Kapoor family, where her parents and other relatives are all involved in the Indian film industry. Despite her family background, her father disliked women entering films, and separated from her mother. Kapoor, at the age of seventeen, left her studies to pursue a film career for financial support, and made her acting debut with a leading role in the moderately successful Prem ... more on Wikipedia

Karisma Kapoor is ranked on...

#37 of 90 The Most Beautiful Indian Actresses of All Time 149.7k VOTES These photos of Bollywood actresses are some of the most attractive women in the world. Here is a full list of gor...

Karisma Kapoor is also found on...