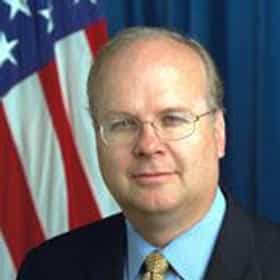 Karl Christian Rove (born December 25, 1950) is an American Republican political consultant and policy advisor. He was Senior Advisor and Deputy Chief of Staff during the George W. Bush administration until his resignation on August 31, 2007. He has also headed the Office of Political Affairs, the Office of Public Liaison, and the White House Office of Strategic Initiatives. Since leaving the White House, Rove has worked as a political analyst and contributor for Fox News, Newsweek and The Wall Street Journal. Prior to his White House appointments, he is credited with the 1994 and 1998 Texas gubernatorial victories of George W. Bush, as well as Bush's 2000 and 2004 successful ... more on Wikipedia

Karl Rove is ranked on...

#15 of 223 People who voted for Karl Rove... People under 30 are 2x more likely to vote for this Lying Politicians: The Worst Liars In American Politics 430.6k VOTES Do any politicians tell the truth anymore? Maybe, but you won't find them here. This list has the least trustworthy people i...
#12 of 166 People who voted for Karl Rove... People on the West Coast are 2x more likely to vote for this The Most Ridiculous Political Pundits 162.6k VOTES This is a bipartisan list of the most over-the-top, spittle-stained, fist-thumping, hyperbolic political pundits of all ti...
#91 of 113 The Most Influential Contemporary Americans 140.8k VOTES A list of the Americans who have had the most central influence on, or importance to, the modern era. This would include Ame...
#31 of 37 37 Glorious Vintage Photos of US Politicians 98k VOTES Enjoy these vintage picturess of politicians when they were young. This list features politicians' high school yearbook pict...
#107 of 160 Celebrity Death Pool 2013 15.4k VOTES Every year we lose more and more famous celebrities. Whether it's from natural causes, suicide, drug abuse or just plain cra...
#12 of 104 People We Loved to Hate in 2012 12.4k VOTES People we loved to hate in 2012 include popular names in sports, entertainment, and, of course in an election year, politics...
#6 of 99 US Political Figures We Hate the Most: 2013 28.5k VOTES I'm starting this list with the political figures I hate the most, but I'm opening it to voting and to the public. Obviously...
#8 of 8 Who Is the Worst Person of the Week? (June 6-12) 815 VOTES Worst Person of the Week tries to keep things light and fun, or at least as light and fun as horrible behavior can be. So wh...
Celebrities Who've Dared To Say Not-Nice Things About Tom Hanks 2.4M VIEWS Tom Hanks is often referred to as the nicest man in Hollywood. He's essentially America's husband and no one dares speak ill...
Famous People Named Carl or Karl 24.8k VIEWS List of famous people named Carl, along with photos. How many celebrities named Carl or Karl can you think of? The famous Ca...
Famous People Who Had Kidney Stones 4.1k VIEWS While rarely serious, kidney stones can be incredibly painful, and famous people with kidney stones can attest to that. Kidn...
26 Famous People Who Were on the Debate Team 92.8k VIEWS List of Famous People Who Were on the Debate Team, loosely ranked by fame and popularity. A debate team is a great way for...
31 Celebrities Who Were in Pi Kappa Alpha 21.6k VIEWS Since 1868, thousands of college men have proudly pledged Pi Kappa Alpha. Among these legions of Pikes are some names and fa...
12 Anti-Gay Politicians with LGBT Relatives 37.1k VIEWS A list of the top 12 anti-gay politicians with LGBT relatives. Karma has a funny way of evening the proverbial playing field...

Karl Rove is also found on...