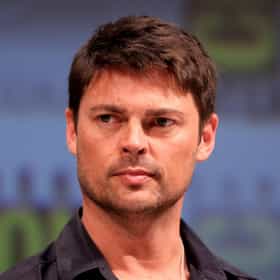 Karl-Heinz Urban (born 7 June 1972) is a New Zealand actor. His career began with appearances in New Zealand films and TV series such as Xena: Warrior Princess. His first Hollywood role was in the 2002 horror film Ghost Ship. Since then, he has appeared in many high-profile movies, including the second and third installments of The Lord of the Rings trilogy in the role of Éomer. He has also portrayed Leonard McCoy in the Star Trek reboot film series, Vaako in the Riddick film series, and Judge Dredd in Dredd. Since 2019, he has starred in Amazon's web television series The Boys. ... more on Wikipedia

Karl Urban is ranked on...

#74 of 194 The Hottest Men Over 40 1.1M VOTES The hottest men in Hollywood? Turns out, the older they get, the more we like them! Like fine wines, tweens, and your favori...
#556 of 1,149 The Best Actors in Film History 2.2M VOTES The best actors ever are ranked here in this list of the best actors in film history. These are the greatest actors ever to ...
#254 of 335 The Greatest Actors Who Have Never Won an Oscar (for Acting) 450k VOTES There are many actors who haven't won an Oscar. For 95 percent of the acting population, there is probably a good reason the...
#280 of 461 The Hottest Male Celebrities 3.4M VOTES You love your boyfriend (husband? Lucky you!), but then there are these hot celebrity men. You see them and then you maybe f...
#269 of 282 The Best (Male) Actors Working Today 1.5M VOTES The best actors working today include Hollywood legends, Academy Award winners and many of the top up and coming actors in t...
#203 of 257 The Best Marvel Movie Actors Ever 575.5k VOTES Ah Marvel movies. It began in 1944 with serialized films of Captain America and 70 years later, are one of the biggest, most...
#37 of 89 Celebrities Who Should Be A-Listers 119.8k VOTES If pop culture has room enough for multiple A-list Jennifers and Chrises, it has enough time to make some space for cer...
#8 of 41 Who Should Replace Ben Affleck As Batman? 19.1k VOTES Who can play Batman? Lots of actors can play Bruce Wayne and his alter ego, and a whole bunch have actually done so, from Ad...
#51 of 86 The Best Actors to Start Their Careers on Soaps 25.4k VOTES This is a list of the best actors to start their careers on soap operas, as voted on by experts and fans alike. Like th...
#47 of 69 2013 TV Awards: Best Actor in a Network Drama 58k VOTES This list of 2013 TV awards is for best actor in a network drama series, so add your picks, please. A slew of great networ...
Famous People Named Carl or Karl 24.6k VIEWS List of famous people named Carl, along with photos. How many celebrities named Carl or Karl can you think of? The famous Ca...
The Celebrity Loves Of Katee Sackhoff 4.1k VIEWS When you need a tough as nails lady for your action or horror film, you get Katee Sackhoff. Some of her film credits include...
Famous People with Widow's Peaks 174.2k VIEWS List of Famous People with Widow's Peaks, loosely ranked by fame and popularity. A widow's peak is the point where an indivi...
#16 of 26 The Best Actors Who Have Played Julius Caesar 357 VOTES There are several famous actors who have played Julius Caesar in movies and on television - and not just in adaptations of t...
Marvel Film Stars React To Stan Lee's Death 12.9k VIEWS Marvel Comics legend, pop culture godfather, and king of the cameo Stan Lee passed away Monday, November 12, 2018, at the ag...

Karl Urban is also found on...