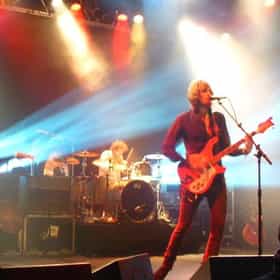 Kasabian ( kə-SAY-bee-ən) are an English rock band formed in Leicester in 1997. The band's original members were vocalist Tom Meighan, guitarist and vocalist Sergio Pizzorno, guitarist Chris Karloff, and bassist Chris Edwards. The band's line-up was completed by drummer Ian Matthews in 2004 after a string of session drummers. Karloff left the band in 2006 and founded a new band called Black Onassis. Jay Mehler joined as touring lead guitarist in 2006. Mehler left the band for Liam Gallagher's Beady Eye in 2013, to be replaced by Tim Carter. In 2010 and 2014, Kasabian won the Q Awards for "Best Act in the World Today", while they were also named "Best Live Act" at ... more on Wikipedia

Kasabian is ranked on...

#12 of 42 The Best Bands Like The Killers 467 VOTES Looking for more bands like The Killers? Fronted by lead vocalist Brandon Flowers, The Killers have been a rock staple since...
#17 of 30 The Best Bands Named After Historical Figures 1k VOTES These bands named after a historical figure are from all genres of music – rock, new wave, metal, pop, and hip-hop. There ar...
#60 of 576 The Best Indie Bands & Artists 154.1k VOTES Before the genre became mainstream (which in itself is paradoxical) indie bands meant that a particular group was signed to ...
#59 of 106 The Best New Prog Bands 6.2k VOTES Once the best progressive rock bands were firmly established, there were several wave of prog rock that happened after the g...
#89 of 162 The Best Neo-Psychedelia Bands 26.4k VOTES While many people associate psychedelic music with the 1960s, there have been other bands from outside this era to play this...
#134 of 676 The Best Alternative Bands/Artists 200.6k VOTES At the end of the 1980s, at the peak of glam rock and hair metal, a new genre began to emerge from the underground. Since it...
#73 of 77 The Best Space Rock Bands 5.8k VOTES Initially known as a genre associated with progressive rock, in particular 1970s British prog rock, space rock bands mixed t...
#69 of 88 The Best Neo-progressive Rock Bands 4.4k VOTES Neo-progressive rock artists list, with photos, ranked best to worst by votes. List of good neo-progressive rock bands inclu...
Bands Named After Notorious Murderers 18.1k VIEWS 20 bands, 20 famous murderers—these 20 bands were named after serial killers, serial killing sprees, or just the famous murd...

Kasabian is also found on...