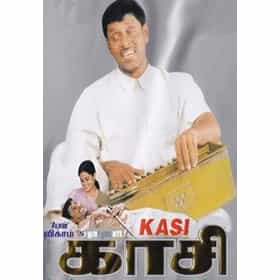 Kasi is a 2001 Indian Tamil tragedy drama film, written and directed by Vinayan. The film has Vikram playing the eponymous character of a blind village singer. A remake of the director's own 1999 Malayalam film Vasanthiyum Lakshmiyum Pinne Njaanum, the film has Kaveri, reprising her role from the original and Kavya Madhavan making her Tamil debut in supporting roles. The film was produced by Aroma Mani for Sunitha Productions. The film score and soundtrack was composed by maestro Ilaiyaraaja. The film was released on November 14, 2001 and won positive reviews from critics upon release. Vikram won the Filmfare Best Actor Award. ... more on Wikipedia

Kasi is ranked on...

Kasi is also found on...