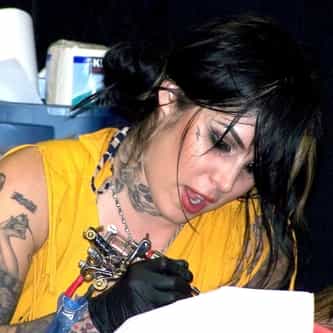 Credits (Film)
Bam Margera Presents: Where the #$&% Is Santa?
The Bleeding
Interactive Lower Back Tattoos

Films Acted In
Bam Margera Presents: Where the #$&% Is Santa?
The Bleeding
Interactive Lower Back Tattoos

Katherine von Drachenberg, known as Kat Von D (born March 8, 1982), is an American tattoo artist, model, musician, author, entrepreneur, and television personality. She is best known for her work as a tattoo artist on the TLC reality television show LA Ink, which premiered in the United States on August 7, 2007, and ran for four seasons. She is also known for her cosmetics line that launched in 2008. ... more on Wikipedia

Kat Von D IS LISTED ON