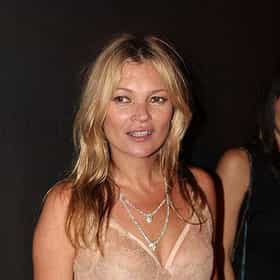 Katherine Ann Moss (born 16 January 1974) is an English model and businesswoman. Born in Croydon, Greater London, she was discovered in 1988 at age 14 by Sarah Doukas, founder of Storm Model Management. Arriving at the end of the "supermodel era", Moss rose to fame in the mid 1990s as part of the heroin chic fashion trend. Her collaborations with Calvin Klein brought her to fashion icon status. She is known for her waifish figure, and role in size zero fashion. She received an award at the 2013 British Fashion Awards to acknowledge her contribution to fashion over 25 years. Moss is also a contributing fashion editor for British Vogue. Moss has had her own clothing range and ... more on Wikipedia

Wild Stories From The Life Of Kate Moss, The Biggest Supermodel Of The '90s 14.3k views Kate Moss is one of the world’s most influential supermodels, becoming the face of ‘90s “heroin chic.” As her name is attach...
The Train-Wreck That Was Johnny Depp And Kate Moss: The Most Self-Destructive Couple of The 1990s 217.4k views Johnny Depp has been in numerous high-profile romances, but the one that dominated headlines in the 1990s was his relationsh...
Kate Moss's Loves & Hookups 59.4k views Who is Kate Moss dating? Who Kate Moss dated; list of Kate Moss loves, ex boyfriends; breakup rumors. The loves, exes and re...

Kate Moss is ranked on...

Kate Moss is also found on...