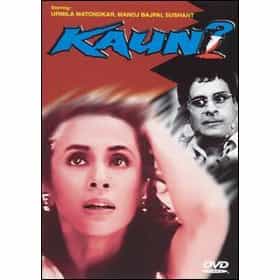 Kaun? is a 1999 Indian psychological thriller film directed by Ram Gopal Verma, written by Anurag Kashyap, and starring Urmila Matondkar, Manoj Bajpai and Sushant Singh. The film features a man claiming to be a white collar worker and another man claiming to be a police inspector, both attempting to get into the house of a young woman. The film is considered to be one of the best collaborations between Ram Gopal Varma and Urmila Matondkar and is touted to be one of the best thriller's of Indian cinema. The film has since received cult status. ... more on Wikipedia

Kaun is ranked on...

Kaun is also found on...