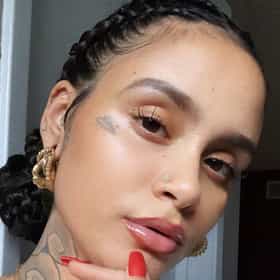 Kehlani Ashley Parrish (born April 24, 1995) is an American singer, songwriter and dancer, signed to Atlantic Records. Kehlani is originally from Oakland, California, where she achieved initial fame as a member of the teen group Poplyfe. In 2014, she released her first commercial mixtape, Cloud 19. The mixtape was listed as one of the Complex's "50 Best Albums of 2014." In 2015, Kehlani released her second commercial mixtape, You Should Be Here. The mixtape debuted at number 5 on the national R&B/Hip-Hop chart, preceded from her sold-out North American promotional tour. In 2016, she was nominated for the Grammy Award for Best Urban Contemporary Album for You Should Be ... more on Wikipedia

All of Kehlani's Loves And Hookups 86.5k views Who is Kehlani dating? Many famous men and women have dated R&B singer Kehlani, and this list will give you more details...
The Best Kehlani Albums, Ranked 51 votes We're ranking the best Kehlani albums of all time. One of the best R&B singers of 2019, Kehlani's discography features s...

Kehlani is ranked on...