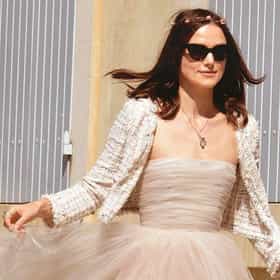 Keira Christina Knightley, (; born 26 March 1985) is an English actress. She is the recipient of an Empire Award and has been nominated for two BAFTA Awards, three Golden Globe Awards, and two Academy Awards. Knightley began acting as a child on television and made her feature film debut in 1995, before making her breakthrough with the 2002 film Bend It Like Beckham. She began playing Elizabeth Swann in 2003 in the Pirates of the Caribbean film series, and she received a nomination for the Academy Award for Best Actress for starring as Elizabeth Bennet in Pride & Prejudice (2005). She subsequently became known for starring in several other period dramas, including Atonement (2007), ... more on Wikipedia

Keira Knightley is ranked on...

Keira Knightley is also found on...