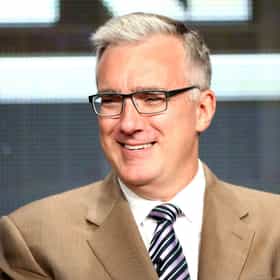 Keith Theodore Olbermann (; born January 27, 1959) is an American sports and political commentator and writer. He currently works for ESPN. Olbermann spent the first 20 years of his career in sports journalism. He was a sports correspondent for CNN and for local TV and radio stations in the 1980s, winning the Best Sportscaster award from the California Associated Press three times. He co-hosted ESPN's SportsCenter from 1992–97. From 1998 to 2001 he was a producer and anchor for Fox Sports Net and a host for Fox Sports' coverage of Major League Baseball. From March 2003 to January 2011 Olbermann hosted the weeknight political commentary program Countdown with Keith Olbermann on MSNBC. ... more on Wikipedia

Keith Olbermann is ranked on...

#219 of 531 Annoying Celebrities Who Should Just Go Away Already 1.2M VOTES The most annoying celebrities, ranked by entertainment fans themselves. These annoying celebs are obnoxious, overexposed, ...
#239 of 257 Celebrities Who Should Run for President 604.4k VOTES Which celebrity would you actually vote for if they ran for President of the United States? If you can remember all the way ...
#8 of 166 The Most Ridiculous Political Pundits 162.6k VOTES This is a bipartisan list of the most over-the-top, spittle-stained, fist-thumping, hyperbolic political pundits of all ti...
#8 of 62 The Worst Sports Personalities on ESPN 38.4k VOTES As much as sports fans love to watch ESPN, sometimes religiously, this doesn't mean that all of its pundits are tolerable. I...
#26 of 104 The Lamest Authors of All Time 70k VOTES There are always going be writers (and books) some folks just don't like. Books, and the skills of the people who write th...
#22 of 46 The Best SportsCenter Anchors of All Time 8.7k VOTES With the recent passing of Stuart Scott, it got me thinking of how the anchors of SportsCenter were such a big part of my li...
#20 of 32 The Most Powerful People on Twitter 2.7k VOTES Who are the most powerful people on Twitter? Let's be clear: Having millions of followers, just because you are super-famous...
#97 of 113 People We Loved to Hate in 2013 40.4k VOTES These are the People we loved to hate in 2013. This list includes a slew of shocking, disheartening and downright dirty happ...
Famous Tall Men Over 6'2 444.7k VIEWS Some of the tallest men in Hollywood may not seem so on your screen. Paired alongside other tall actors, shorts actors weari...
Famous People Named Keith 24.1k VIEWS List of famous people named Keith, along with photos. How many celebrities named Keith can you think of? The famous Keiths b...
300+ Famous People Who Went to Prep School 12.5k VIEWS Many of the most powerful people in the world went to prep school. The children of wealthy parents - often "old money&q...
32 Famous People of German Descent 63.4k VIEWS This list of famous people of German descent ranked by fame and popularity. Many famous people are of German descent. Some o...
Celebrities Who (Probably) Have Asperger's Syndrome 1.4M VIEWS List of famous people with Aspergers syndrome ranked by fame and popularity. Aspergers syndrome is a disorder that falls on ...
Celebrity Yankee Fans 151.4k VIEWS This list of celebrity Yankee fans is loosely ranked by fame and popularity. The New York Yankees baseball team has a lot of...
Famous Celebrities Who Are Gluten Free 54.2k VIEWS Gluten-free options are popping up at restaurants everywhere, and it’s probably because of these G-free celebrities. Getting...
99 Celebrities Who Went to Ivy League Schools 380.3k VIEWS Celebrities who went to Ivy League schools are those smarty pants actors, musicians, and other famous people in the entert...

Keith Olbermann is also found on...