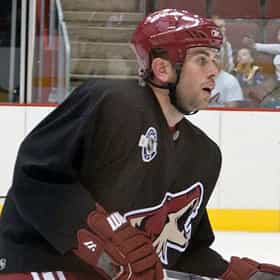 Keith Michael Yandle (born September 9, 1986) is an American professional ice hockey defenseman and alternate captain for the Florida Panthers of the National Hockey League (NHL). He previously played for the New York Rangers and Arizona Coyotes, the organization he was drafted by in the fourth round, 105th overall, at the 2005 NHL Entry Draft. Yandle quickly established himself as a premier offensive defenseman, leading the Coyotes in points in both the 2012–13 and 2013–14 seasons. He is currently the NHL ironman with the most consecutive games played, as of the end of 2018–19, he stands 5th all time with 797 consecutive games played. ... more on Wikipedia

Keith Yandle is ranked on...

#59 of 72 The Greatest American Hockey Players of All Time 13.4k VOTES This list of the greatest American hockey players includes some of the NHL's best players, including Mike Modano, Jeremy Roe...
#36 of 54 Who Will Win The 2020 Hart Memorial Trophy? 898 VOTES Among the many NHL awards handed out each year, the Hart Trophy is easily one of the most sought-after — which is synonymous...
#29 of 56 The Best Arizona Coyotes of All Time 6.4k VOTES Some of the greatest Arizona Coyote players in team history are also some of the most recognizable faces in the league. Many...
#22 of 43 The Greatest Florida Panthers of All Time 4k VOTES List of the greatest Florida Panthers of all time. The Panthers hail from Florida, where they reign over the rink. From Nath...
Famous People Named Keith 24.9k VIEWS List of famous people named Keith, along with photos. How many celebrities named Keith can you think of? The famous Keiths b...

Keith Yandle is also found on...