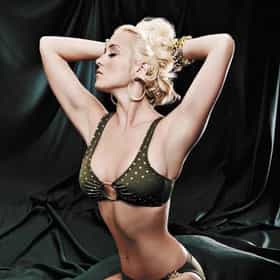 Kellie Dawn Pickler (born June 28, 1986) is an American country music artist, actress and television personality. Pickler gained fame as a contestant on the fifth season of American Idol and finished in sixth place. In 2006, she signed to 19 Recordings and BNA Records as a recording artist. Her debut album, Small Town Girl, was released later that year and has sold over 900,000 copies. The album, which was certified gold by the RIAA, produced three singles on the Billboard Hot Country Songs charts: "Red High Heels" at #15, "I Wonder" at #14, and "Things That Never Cross a Man's Mind" at #16. Pickler released her self-titled second album in 2008 that ... more on Wikipedia

Kellie Pickler is ranked on...

#103 of 218 The Greatest New Female Vocalists of the Past 10 Years 1.8M VOTES The greatest female vocalists of the 2000s from all over the globe duke it out to see who has the best voice. While every ...
#423 of 608 The Most Beautiful Women Of 2019, Ranked 1.5M VOTES UPDATED: Check out the most beautiful women of 2020! This list rounds up the most beautiful women in the world in 2019. Th...
#47 of 157 People who voted for Kellie Pickler... People under 30 are 2x more likely to vote for this also upvote Star Wars Franchise on The Best Movies of All Time The Top Female Country Singers 224.4k VOTES Update: Follow Ranker's official New Country 2020 playlist on Spotify! Some of the biggest selling and most popu...
#77 of 163 The Best Hallmark Channel Actresses 259.5k VOTES They're the stars, the moms, the sisters, and the best friends. These Hallmark Channel actresses bring Hallmark Channel Orig...
#8 of 161 People who voted for Kellie Pickler... also upvote X-Men Franchise on The Best Superhero Movies Ever Made also upvote Harry Potter Franchise on The Most Rewatchable Movies The Best American Idol Contestants Ever 96.8k VOTES Who are the best American Idol contestants ever? As the FOX reality singing competition show continues on after a dozen seas...
#8 of 25 The Best 'Dancing with the Stars' Winners of All-Time 14.4k VOTES After checking out the votes for the best DWTS Season 28 contestants, check out this complete list of Dancing with...
#87 of 104 New American Idol Judge Picks 25.4k VOTES Who should the new 'American Idol' judge picks be? With word that 'AI' judges Steven Tyler and Jennifer Lopez are calling it...
#13 of 103 The Best Musical Artists From North Carolina 2k VOTES Here are the best artists and bands from North Carolina. North Carolina has a long tradition of old-timey music. The state p...
Here's a List of Every Known Republican Celebrity 1.8M VIEWS Conservative celebrities - this list of Republican celebrities has over 400 celebrities who are Republicans. What celebritie...
Hallmark Channel Actors and Actresses 156.9k VIEWS The Hallmark Channel may have a primary group of talent they work with but they also employ a wide range of actors you will ...
#43 of 109 The Best Country Artists Of The 2010s 6k VOTES Here are the best country artists of the decade, ranked by fans everywhere. Featuring female country singers, clas...
#18 of 50 The Best Country Singers From North Carolina 669 VOTES Here are the best country artists and country bands from North Carolina. It is safe to say that without the contributions of...
9 Celebrities Whose Parents Have Been In Prison 201.2k VIEWS List of Celebrities Whose Parents Have Been in Prison, ranked by fame and popularity. Several famous people came from less t...
Celebrity Weddings: 2011 Famous Marriages List 62.6k VIEWS A look at celebrity weddings in 2011. List of famous celebrities married in 2011, complete with celebrity couple wedding pho...
The Top Earning American Idol Alumni 19.9k VIEWS "American Idol" has been on the air, creating new superstars since 2002. Since then, its winners have gone on to v...

Kellie Pickler is also found on...