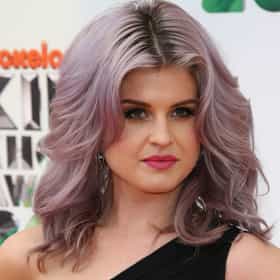 Kelly Michelle Lee Osbourne (born 27 October 1984) is a British singer-songwriter, actress, television presenter and fashion designer. The daughter of Ozzy and Sharon Osbourne (née Levy), she is known for her appearances on The Osbournes with her family, for which they won a 2002 Emmy Award for Outstanding Reality Program, as well as on E!'s Fashion Police, where she was a presenter from 2010 to 2015. She has also appeared on Dancing with the Stars, in which she and her professional dance partner Louis van Amstel took third place. She is the voice of Hildy Gloom in the Disney XD animated series The 7D. She is also a judge on both Australia's Got Talent and Project Runway ... more on Wikipedia

Kelly Osbourne is ranked on...

#96 of 524 People who voted for Kelly Osbourne... Men are 2x more likely to vote for this Annoying Celebrities Who Should Just Go Away Already 1.2M VOTES The most annoying celebrities, ranked by entertainment fans themselves. These annoying celebs are obnoxious, overexposed, ...
#12 of 12 12 Celebs Who Went Through A Major Goth Phase 41.4k VOTES The words "goth" and "celebrity" go together like black lipstick and a smart suit. In other words, it's ...
#331 of 355 The Best Nu Metal Bands 90k VOTES Update: Follow Ranker's official New Metal 2020 playlist on Spotify! Nu metal artists list, with photos, ranked ...
Celebrities Who Had To Quit Drinking 511k VIEWS List of celebrities who quit drinking. Many celebrities have given up alcohol. Some of these famous people gave up drinking ...
Celebrities Who Can Relate To Your Middle Child Syndrome 909 VIEWS Some of the most famous people in the world grew up as the middle child of their families. Famous middle children have succe...
Famous People Describe What It's Like To Grow Up With An Alcoholic Parent 12.4k VIEWS Celebrities have things easy in some respects; they're surrounded by glitz and glamour, they rarely lack money or finan...
Celebrities Who Have Been Busted For Tax Evasion 111.6k VIEWS This list contains information about celebrities who have experienced tax trouble, loosely ranked by fame and popularity. ...
The 35 Most Embarrassing Celebrity Selfies 2.4M VIEWS A list of embarrassing celebrity selfies – here you'll see celebrities looking less than stellar when they are trying t...
Famous High School Dropouts 1M VIEWS Check out this list of famous high school dropouts ranked by fame and popularity. Some of the most famous actors and musicia...
50 Celebrities Who Broke Off Engagements 40.4k VIEWS This list contains information about celebrities who broke off engagements, loosely ranked by fame and popularity. Several f...
15 Celebrities Who Say They Were Overweight As Kids 31.6k VIEWS Several famous actors, musicians, and TV personalities were fat kids. Some of these people who were fat have shared stories ...
Fab Life: Celebrities With Fugliest Hairstyles Ever 6.1k VIEWS The Fab Life's list of the uglies celebrity hair in entertainment. Seems like these stars need a little hair advice. For t...
Celebrities Who Live In West Hollywood 378.8k VIEWS List of celebrities who live in West Hollywood, loosely ranked by fame and popularity. West Hollywood, California is a pop...
Celebrities Who Are BFF with Their Moms 4.6k VIEWS Parents of celebrities aren't often recognized unless they are famous themselves, too. Obviously Goldie Hawn and Kate Hudson...
People who voted for Kelly Osbourne... are 12x more likely to vote for Sharon Osbourne on this list are 7x more likely to vote for Joan Rivers on this list The Best Reality Stars on Twitter 57.5k VIEWS The best reality TV stars on Twitter, based on the entertainment value of their tweets. Perhaps it's the constant cameras, l...

Kelly Osbourne is also found on...