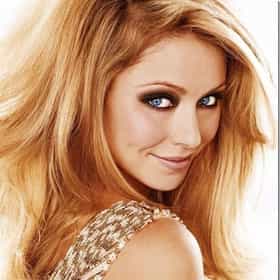 Kelly Maria Ripa (born October 2, 1970) is an American actress, dancer, talk show host, and television producer. Ripa portrayed Hayley Vaughan on the ABC daytime soap opera, All My Children, between 1990 and 2002. She is the co-host of the syndicated morning talk show, Live! with Kelly and Ryan, in various formats since 2001. She also played Faith Fairfield on the ABC sitcom, Hope & Faith, from 2003 to 2006. Ripa and her husband, Mark Consuelos, own a New York-based production company, Milojo.In 2014, The Hollywood Reporter named her one of the Most Powerful People in Media. ... more on Wikipedia

The Two Men Who Stole Kelly Ripa's Heart 553 views She is a queen of daytime TV, so you’d think there would be a lot of Kelly Ripa exes. However, the Kelly Ripa dating history...

Kelly Ripa is ranked on...

Kelly Ripa is also found on...