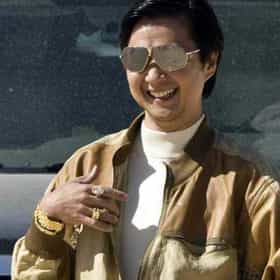 Kendrick Kang-Joh Jeong, M.D. (born July 13, 1969) is an American comedian, actor and physician. He is best known for playing Ben Chang on the sitcom Community and the drug lord Leslie Chow in The Hangover film series. He was the lead in the ABC sitcom Dr. Ken, in which he was also the creator, writer, and executive producer. Jeong is a licensed physician, but has stopped practicing in favor of his acting career. He currently appears as a panelist on the singing competition show The Masked Singer. ... more on Wikipedia

Ken Jeong is ranked on...

#100 of 362 People who voted for Ken Jeong... People under 30 are 2x more likely to vote for this also upvote Star Wars Franchise on The Best Movies of All Time The Funniest People of All Time 868.4k VOTES The funniest people of all time are a mix of actors, comedians, and even a few people who probably didn't start off trying t...
#171 of 179 The Best Living American Actors 265.1k VOTES It takes a lot to make a movie great. There has to be excellent writing, production, direction, editing, and of course, acti...
#149 of 408 The Funniest Stand Up Comedians Of All Time 1M VOTES A ranked list of the best stand up comedians in the history of the art form. First and foremost, all of the people on this l...
#159 of 348 Popular Things You're Just Not Interested In 184k VOTES Face it, when it comes to solid taste, majority doesn't always rule. It's time to take a good long look at popular thin...
#21 of 142 The Best Hot Ones Guests Ever 21.1k VOTES Hot Ones is the show with hot questions and even hotter wings. Hot Ones has taken YouTube by storm, pitting various A-list c...
#2 of 23 Who Would Star In A Live-Action 'King Of The Hill' Movie? 7.5k VOTES King of the Hill might be one of the most hilarious and underrated shows of all time, but the show's 13-season run and ...
#79 of 116 The Best Short Actors 50.9k VOTES Who are the best short actors? Some of the incredibly famous actors on this list are surprisingly diminutive, coming in at 5...
#7 of 20 People Who’ve Been Typecast, Ranked By How Often They Play That One Thing 2.5k VOTES Ever wonder why there are some actors who play the same role over and over again? Hollywood is a tough city, and s...
#5 of 54 The Best Asian American Actors And Actresses In Hollywood 5.3k VOTES While it has seen some controversy over the years, diversity in Hollywood has long been part of its rich history. And while ...
#11 of 14 The Best Celebrities to Team With During the Zombie Apocalypse 4.4k VOTES Building the A-team during the zombie apocalypse is crucial to survival. We've listed the absolute best celebrities you shou...
#2 of 85 The Biggest Asian Actors In Hollywood Right Now 7.4k VOTES As the film and TV industry grow in diversity, who do you think are the biggest Asians in Hollywood right now? While plenty ...
#4 of 23 23 Magic Cards That Look Like Celebrities 12.1k VOTES A collection of Magic Cards that look eerily too similar to famous people. Sure, your girlfriend probably hates it when you ...
#76 of 118 People who voted for Ken Jeong... People on the West Coast are 2x more likely to vote for this The Best Celebrity Partners to Have on a Game Show 90.8k VOTES Choosing the right partner in life is important. Choosing the right celebrity partner to have on a game show is way, way, ...
#10 of 61 Celebrities You Want On Your Trivia Team 8.9k VOTES It’s easy to assume celebrities are not very intelligent and that they are just beautiful people reciting lines for our ente...
#12 of 24 Celebrities With Surprising College Degrees 3.9k VOTES Not every celebrity knew from the get-go they wanted to perform. Many future stars arrive at college without ...
The Smartest Celebrities 805.1k VIEWS The smartest celebrities are those who have documented high IQs, multiple degrees from distinguished universities, and a h...
Famous People Named Ken 27.9k VIEWS If your name is Ken, then you're in some great company. Here's our list of the most famous people named Ken or Kenny, includ...
#46 of 60 The Best Episodes of WIRED's Autocomplete Interviews 356 VOTES There's nothing like procrastinating on YouTube by watching your favorite celebrities answer questions that you may or may n...
#4 of 21 The Funniest Asian Comedians of All Time 3.4k VOTES This list contains information about the best Asian comedians, loosely ranked by user votes. The best Asian comedians come i...
32 Celebrities Who Have Saved The Lives Of Regular People 121.6k VIEWS Heroes come in all shapes and sizes, but this is a look at some famous heroes. Celebrity Good Samaritans have helped people ...
Actors in the Most Judd Apatow Movies 9.7k VIEWS These are the actors who have been in the most Judd Apatow movies, ranked by number of appearances. Judd Apatow reinvented t...
17 People You Forgot Guest Starred on The Office 45.7k VIEWS Guest stars on The Office weren't an uncommon occurrence. The show went on for a whopping nine seasons (201 episodes), so th...
Male Celebrities Who Are 5’4" 11.7k VIEWS This list contains examples of male celebs who are 5'4" loosely ranked by fame and popularity. Standing below the avera...
Celebrities Who Turned 50 in 2019 41k VIEWS UPDATE: Check out the celebrities who are turning 50 in 2020! Several celebrities celebrated their 50th birthdays in 2019....
15 Famous People Who Went to Med School 532.1k VIEWS Several famous actors, athletes, musicians, and politicians have attended medical school. Some of these celebrities gradua...
Celebrity Lakers Fans 295.7k VIEWS Go team! This is a list of celebrity Lakers fans, ranked by fame and popularity. The Los Angeles Lakers basketball team has ...
Celebrities Who Live in Calabasas & Hidden Hills 25.7k VIEWS This list includes information about celebrities who live in Calabasas, loosely ranked by popularity. Celebrities that live ...

Ken Jeong is also found on...