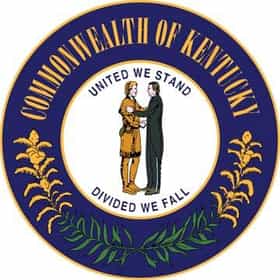 Kentucky, officially the Commonwealth of Kentucky, is a state located in the east south-central region of the United States. Kentucky is one of four U.S. states constituted as a commonwealth. Originally a part of Virginia, in 1792 Kentucky became the 15th state to join the Union. Kentucky is the 37th most extensive and the 26th most populous of the 50 United States. Kentucky is known as the "Bluegrass State", a nickname based on the bluegrass found in many of its pastures due to the fertile soil. One of the major regions in Kentucky is the Bluegrass Region in central Kentucky which houses two of its major cities, Louisville and Lexington. It is a land with diverse ... more on Wikipedia

Kentucky is ranked on...

Kentucky is also found on...

States with the Highest Divorce Rates List of All Official U.S. State Fruits