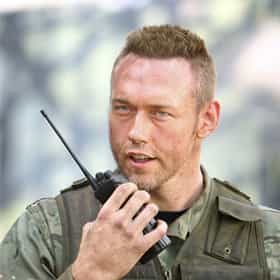 Kevin Serge Durand (born January 14, 1974) is a Canadian actor and singer. Durand is known for portraying Vasiliy Fet in The Strain, Joshua in Dark Angel, Martin Keamy in Lost, Fred J. Dukes / The Blob in X-Men Origins: Wolverine, Gabriel in Legion, Little John in Robin Hood, Jeeves Tremor in Smokin' Aces, and Carlos in The Butterfly Effect. He received a 2012 Best Supporting Actor Genie nomination for his portrayal of Lenny Jackson in Citizen Gangster. A former comedian, Durand has performed in a wide variety of starring roles in numerous independent and major studio features, ranging from comedies to drama to science fiction and action thrillers. ... more on Wikipedia

Kevin Durand is ranked on...

Famous Tall Men Over 6'2 447.6k VIEWS Some of the tallest men in Hollywood may not seem so on your screen. Paired alongside other tall actors, shorts actors weari...
Celebrity Babies Who Were Born in 2015 44.7k VIEWS Another year, another crop if super adorable celebrity kids! This list includes all of the celebrity babies born in 2015. Sa...

Kevin Durand is also found on...