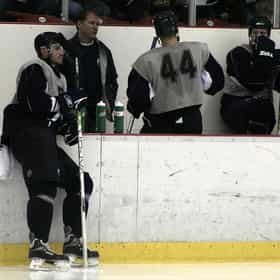 Kevin Hugh Lowe (born April 15, 1959) is a Canadian professional ice hockey executive, former coach and former player. Lowe is the vice-chairman of Oilers Entertainment Group, having formerly served successively as head coach and then general manager of the Edmonton Oilers. As a defenceman, he played for the Edmonton Oilers and the New York Rangers. Over his career, Lowe won the Stanley Cup six times and is a seven-time all-star. In 1990, he was awarded the King Clancy Memorial Trophy. ... more on Wikipedia

Kevin Lowe is ranked on...

Kevin Lowe is also found on...