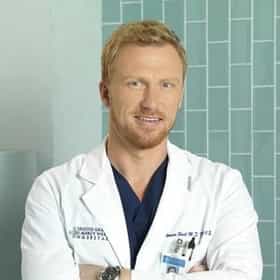 Kevin McKidd (born 9 August 1973) is a Scottish television and film actor, director, and occasional singer. Before playing the role of Owen Hunt in Grey's Anatomy, for which he is widely known, McKidd starred as Dan Vasser in the NBC series Journeyman (2007), Tommy in Danny Boyle's Trainspotting (1996), Count Vronsky in the BBC miniseries Anna Karenina (2000), and Lucius Vorenus in the historical drama series Rome (2005–2007). He provided the voice of John "Soap" MacTavish in the video games Call of Duty: Modern Warfare 2 and Call of Duty: Modern Warfare 3. He played Poseidon in the film Percy Jackson & the Olympians: The Lightning Thief, and Fr. Deegan in the Father Ted ... more on Wikipedia

Kevin McKidd is ranked on...

#216 of 273 People who voted for Kevin McKidd... also upvote Harry Potter Franchise on The Best Movies of All Time The Greatest British Actors of All Time 289.4k VOTES This list of the greatest British actors of all time has been ranked by fans of the films and TV shows in which these men ha...
#26 of 53 The Best Scottish Actors Working Today 80.7k VOTES There have been plenty of great Scottish actors throughout film history, but which male Scottish actors working today are th...
#24 of 43 The Top Casting Choices for the Next James Bond Actor 254.9k VOTES Who is going to be the new James Bond actor now that Daniel Craig doesn't want to be 007 in the next James Bond outing? Sinc...
#28 of 61 The Best Scottish Actors of All Time 72.8k VOTES Scotland isn't just about whiskey, it's also the home country of many of Hollywood's top actors. This list of the best Scott...

Kevin McKidd is also found on...