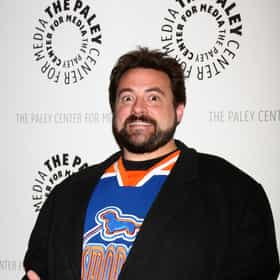 Kevin Patrick Smith (born August 2, 1970) is an American filmmaker, actor, comedian, comic book writer, author, and podcaster. He came to prominence with the low-budget comedy film Clerks (1994), which he wrote, directed, co-produced, and acted in as the character Silent Bob of stoner duo Jay and Silent Bob. Jay and Silent Bob have appeared in Smith's follow-up films Mallrats, Chasing Amy, Dogma, Jay and Silent Bob Strike Back and Clerks 2, which were set primarily in his home state of New Jersey. While not strictly sequential, the films frequently featured crossover plot elements, character references, and a shared canon described by fans as the "View Askewniverse", named ... more on Wikipedia

Behind-The-Scenes Stories From The Making Of ‘Clerks’ 2.6k views When it was released in 1994, Clerks was a revolutionary depiction of Generation X, stoner culture, retail, and society as a...
A Timeline Of Ben Affleck And Kevin Smith's Complicated Friendship 177.7k views Take one look through film history and you'll find ample director/actor combinations who've made movie magic together. From ...
Kevin Smith Fulfilled A Childhood Dream Working With Bruce Willis - It Turned Out To Be A Nightmare 235.9k views When Kevin Smith worked with Bruce Willis on the set of Live Free or Die Hard (2007), their relationship was nearly perfect....
The Best Kevin Smith Movies 1.4k votes List of the best Kevin Smith movies, ranked best to worst with movie trailers when available. Kevin Smith's highest grossing...

Kevin Smith is ranked on...

#89 of 223 People who voted for Kevin Smith... also upvote Star Trek Franchise on The Greatest Sci-Fi Movies of All Time also upvote Harry Potter Franchise on The Best Movies of All Time The Greatest Living Directors, Ranked 84.9k VOTES List of the best living filmmakers (though not necessarily still actively making films.) When discussing the finest director...
#13 of 122 People who voted for Kevin Smith... also upvote Star Wars Franchise on The Best Movies of All Time The Best Comedy Directors in Film History 14.4k VOTES Titans of comedy! These kings of clowning are the best comedy directors ever to make side-splitting movies. This list includ...
#221 of 525 Famous Men You'd Want to Have a Beer With 1.8M VOTES If given the opportunity to sit down for a beer with any famous male figure, which famous men would you most want to get a d...
#230 of 783 The Greatest Directors In Movie History 306k VOTES List of the greatest directors in movie history, who are most deserving of Academy Awards and critical recognition. The list...
#499 of 1,452 Celebrity Death Pool 2018 477.7k VOTES Welcome to Celebrity Death Pool 2018! In increasingly uncertain times, there remains one constant in life - we all die. Cele...
#31 of 136 The Best Joe Rogan Podcast Guests 83.9k VOTES The Joe Rogan Experience podcast is one of the oldest and most successful podcasts of all time. This isn't surprising&n...
#13 of 50 50+ Actors You Forgot Were In Comic Book Movies 40.5k VOTES Over the years, some of the most celebrated actors in history have shown up on the big screen to star, to support, or even j...
#5 of 14 Stormtrooper Cameos Throughout The 'Star Wars' Universe 505 VOTES This should come as no great surprise, but there are plenty of stormtrooper celebrity cameos throughout the Star Wars franch...
#8 of 29 All The Insanely Famous People Who Guest Starred On Veronica Mars 447 VOTES When it comes to picking your favorite, there is certainly no shortage of Veronica Mars guest stars to choose from. Dur...
#20 of 51 Who Should Direct the New Star Wars Films? 8.5k VOTES It was announced that Disney has bought Lucasfilm for 4.05 billion dollars. Not only that, but they have also stated that th...
#20 of 56 The Best Romantic Comedy Directors in Film History 224 VOTES Who are the best romantic comedy directors in film history? You get to decide. Making a good rom-com is harder than it looks...
Famous People Whose Last Name Is Smith 24.1k VIEWS Being a fairly common name, it's no surprise there are a lot of famous people with the last name Smith. Do you recognize all...
60+ Celebrities Who Smoke Weed 70.5M VIEWS List of celebrities who smoke weed, loosely ranked by fame and popularity. More and more celebrities are speaking of their d...
Famous People Named Kevin 74.4k VIEWS List of famous people named Kevin, along with photos. How many celebrities named Kevin can you think of? The famous Kevins b...

Kevin Smith is also found on...