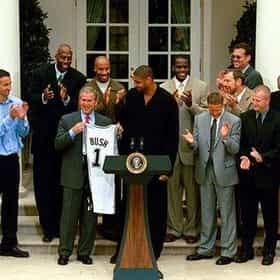 Kevin Alvin Willis (born September 6, 1962) is an American former professional basketball player mostly known for playing with the Atlanta Hawks in the National Basketball Association (NBA). He was a 7-foot power forward/center. Willis is one of fifteen players in NBA history with over 16,000 career points and 11,000 career rebounds. He was named to the NBA Eastern Conference All-Star Team in 1992, when he finished the season with a career-high average of 15.5 rebounds a game. Willis holds career averages of 12.2 ppg, 8.4 rpg, and 0.9 apg while averaging 27 minutes per game in 21 NBA seasons. During his 23 years in the league, Willis won one championship, with the San Antonio Spurs in ... more on Wikipedia

Kevin Willis is ranked on...

Kevin Willis is also found on...