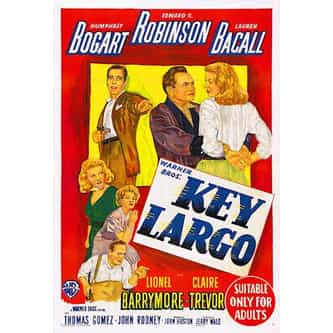 Tagline
A cast as explosive as its story!

Key Largo is a 1948 film noir directed by John Huston and starring Humphrey Bogart, Edward G. Robinson and Lauren Bacall and featuring Lionel Barrymore and Claire Trevor. The movie was adapted by Richard Brooks and Huston from Maxwell Anderson's 1939 play of the same name, which played on Broadway for 105 performances in 1939 and 1940. Key Largo was the fourth and final film pairing of married actors Bogart and Bacall, after To Have and Have Not, The Big Sleep, and Dark Passage. Trevor won ... more on Wikipedia

Key Largo IS LISTED ON