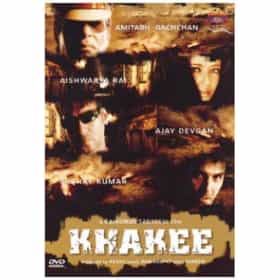 Khakee is a 2004 Indian neo-noir political drama thriller film directed and co-written by Rajkumar Santoshi. The film tells the story of an Indian police team set out on a dangerous mission to escort a terrorist accused - arrested as by the infamous Prevention of Terrorism Act - from a remote town in Maharashtra to Mumbai. The film stars an ensemble cast including Amitabh Bachchan, Akshay Kumar, Ajay Devgan, Aishwarya Rai, Prakash Raj, Tusshar Kapoor, Atul Kulkarni, and Jaya Pradha. Lara Dutta appears as a bar dancer in the song Aisa Jadoo. The film released on 23 January 2004 to widespread critical acclaim and went on to become one of the highest-grossing Hindi films of the year. ... more on Wikipedia

Khakee is ranked on...

Khakee is also found on...