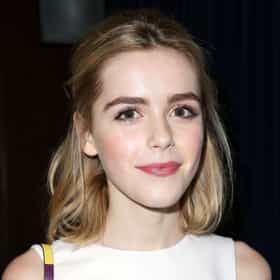 Kiernan Brennan Shipka (born November 10, 1999) is an American actress known for starring as Sabrina Spellman on the Netflix supernatural horror series Chilling Adventures of Sabrina (2018–present) and Sally Draper on the AMC period drama series Mad Men (2007–2015). Shipka also appeared as B. D. Hyman in the FX anthology series Feud: Bette and Joan (2017) and voiced Jinora in the Avatar: The Last Airbender sequel, The Legend of Korra (2012–2014).Shipka has also starred in numerous films, including Carriers (2009), Flowers in the Attic (2014), The Blackcoat's Daughter (2015), and The Silence (2019). ... more on Wikipedia

Kiernan Shipka is ranked on...

#292 of 568 The Most Beautiful Women Of 2019, Ranked 1.3M VOTES UPDATED: Check out the most beautiful women of 2020! This list rounds up the most beautiful women in the world in 2019. Th...
#253 of 331 The Best Actresses Working Today 387.3k VOTES List of the best actresses working today, ranked. This list includes many of the greatest actresses in film history, but mor...
#831 of 1,026 The Most Beautiful Women In Hollywood 4.4M VOTES The most beautiful women in the world are a great mix of attractive TV actresses, singers, models, and more, ...
#91 of 156 The Most Beautiful Young Actresses Under 30 1.2M VOTES The most beautiful actresses under 30 are some of the most talented actresses working in Hollywood today. These are all...
#8 of 24 Who Would Star In 'Ferris Bueller's Day Off' If It Were Made Today? 4.7k VOTES We live in an age of reboots and remakes. Although there is currently no plan for a Ferris Bueller remake, it’s still fun to...
#69 of 89 People who voted for Kiernan Shipka... also upvote James Bond Franchise on Every James Bond Movie, Ranked Best to Worst also upvote Star Trek Franchise on The Best Movies Based on TV Shows Celebrities Who Should Be A-Listers 120.1k VOTES If pop culture has room enough for multiple A-list Jennifers and Chrises, it has enough time to make some space for cer...
#21 of 68 Celebrating The Best Young Actors Of The 2010s 1.3k VOTES Some of them may not be old enough to drink - or even drive - but the top young actors of the 2010s have managed to accompli...
#2 of 15 How the Cast of Mad Men Aged from the First to Last Season 2k VOTES Mad Men premiered on AMC on July 19, 2007. By the time the series finale aired on May 17, 2015, viewers ...
#4 of 51 People who voted for Kiernan Shipka... also upvote Lord of the Rings Franchise on The Best Fantasy Movies also upvote James Bond Franchise on The Greatest Action Movies of All Time The Next Generation Of Stars (Age 20 and Under) 197.7k VOTES Before we know it, all the great actors and actresses from this generation will all be old and receiving Lifetime Achievemen...
#101 of 122 Who Was America's Sweetheart in 2017? 69.3k VOTES These female celebrities are the most desirable girlfriends of America, but only one can be American's girlfriend in 2017. T...
#12 of 28 Who Should Play Squirrel Girl in the Marvel Movies? 2.9k VOTES So, who could play Squirrel Girl in a movie? Doreen Green isn't too high on the list of most popular Marvel characters, but ...
#21 of 58 Celebrities Who Would Make The Best Maid Of Honor 252 VOTES Who would be your dream celebrity maids of honor? When considering celebrity women who’d make good maids of honor, you want ...
#74 of 102 Who Is The Most Famous Actress In The World Right Now? 91.1k VOTES When it comes to Hollywood, the most famous actresses can change like the seasons. With so many films and TV shows coming ou...
#11 of 53 The 50+ Best Young Actresses Under 25 4.1k VOTES Who are the young actresses that will take the places of stars like Miley Cyrus and Selena Gomez, who have since graduated f...
Famous Scorpio Female Celebrities 36.6k VIEWS Independent, passionate and resourceful, it's no wonder so many female celebrities are Scorpios. Whether they're actors, sin...
Celebrities Turning 21 In 2020 358 VIEWS Pop the bubbly! Joining the list of celebrities that are 21 in 2020 are actresses Joey King, Sabrina Carpenter, and Hun...

Kiernan Shipka is also found on...