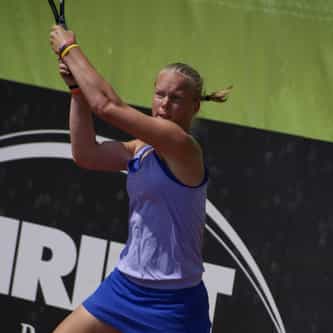 Kiki Bertens (Dutch pronunciation: [ˈkiki ˈbɛrtəns]; born 10 December 1991) is a Dutch tennis player who turned professional in 2009. Her highest WTA singles ranking is No. 4, which she reached on 13 May 2019, becoming the highest ranked Dutch female player ever. Her career high in doubles is world No. 16, achieved in April 2018. To date, she has won nine singles titles and ten doubles titles on the WTA Tour including 2018 Western & Southern Open and 2019 Mutua Madrid Open. Bertens is ... more on Wikipedia

Kiki Bertens IS LISTED ON