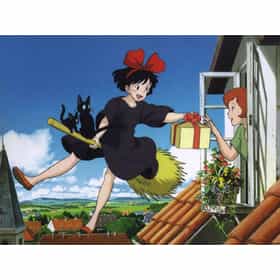 Kiki's Delivery Service is a 1989 Japanese animated fantasy film produced by Studio Ghibli. It was written, produced and directed by Hayao Miyazaki as an adaptation of the 1985 novel of the same name by Eiko Kadono. The film tells the story of a young witch, Kiki, who moves to a new town and uses her flying ability to earn a living. According to Miyazaki, the movie portrays the gulf between independence and reliance in teenage Japanese girls. Kiki's Delivery Service was released in Japan on July 29, 1989, and won the Animage Anime Grand Prix prize. It was the first Studio Ghibli film released under the distribution partnership between The Walt Disney Company and Studio Ghibli; Walt ... more on Wikipedia

Kiki's Delivery Service is ranked on...