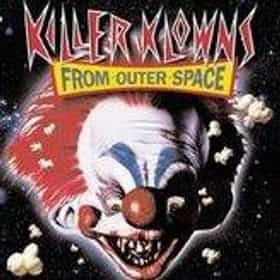 Killer Klowns from Outer Space is a 1988 American science fiction horror comedy movie made by The Chiodo Brothers and starring Grant Cramer and Suzanne Snyder. It is the only Chiodo Brothers' directed and written film – they have worked in many other projects in other roles, such as producing and visual effects. The filming took place in the city of Watsonville and at the Santa Cruz Beach Boardwalk. The film is about a race of aliens that arrive on Earth to capture and harvest people to use as sustenance. A sequel entitled Return of the Killer Klowns from Outer Space in 3D is currently in pre-production and is tentatively scheduled for release in 2016. ... more on Wikipedia

Killer Klowns from Outer Space is ranked on...

#299 of 575 The Greatest Movies Of The 1980s, Ranked 507.2k VOTES Since it was one of the greatest decades for film, here's a list of the best movies of the 80s. These are the most popu...
#405 of 992 The All-Time Greatest Comedy Films 414k VOTES The best comedy movies of all time are listed here, in one convenient list to be voted on and ranked by true fans. Thes...
#281 of 630 The Greatest Guilty Pleasure Movies 199.7k VOTES   What makes a film a guilty pleasure? This is a movie that you love to watch, but won't display on your DVD shelf......
#240 of 770 The Best Horror Movies of All Time 1M VOTES Horror movies, ranked by adrenaline junkies worldwide. Anyone can vote on this CrowdRanked list, and can even add your own f...
#151 of 440 The Funniest '80s Movies 172.7k VOTES List of the funniest 80s movies. The best comedy films of the 1980s are listed here in order of greatness. Feel free to crea...
#8 of 35 The Scariest Clown Movies in Film History 33.2k VOTES   Movies with the scariest clowns are designed to play on our irrational fear of the normally jolly, happy creatures....
#164 of 193 The Best Alien Movies Ever Made 249.5k VOTES The best alien movies, ranked by fans of space and sci-fi genres. Alien movies can take several forms. What are the best ali...
#669 of 1,203 The Absolute Funniest Movies Of All Time 1M VOTES The funniest movies of all time, ranked by fans. What are the funniest movies ever made? From Airplane! to The Jerk to The 4...
#89 of 347 The Best Movies of 1988 12.7k VOTES A list of the best movies of 1988, from light dramas like Bull Durham to action movies like Die Hard.The '80s were a decade ...
#190 of 569 The Greatest Disaster Movies of All Time 95.7k VOTES These are the most entertaining, the most fun, the greatest disaster movies ever made, ranked by movie experts and film fans...
#41 of 59 The Most Rewatchable Horror Movies 16.7k VOTES Is there such a thing as comfort movies when it comes to horror? This is a list of horror movies we keep watching, even when...
#7 of 27 The Best Horror Movies About Carnivals and Amusement Parks 1.7k VOTES Is there anything creepier than an abandoned carnival? Since the answer is no, we're ranking the best horror movies about ca...
#12 of 27 The Greatest Horror Parody Movies, Ranked 1.9k VOTES Horror parody movies find the funny in the often ridiculous scenarios of classic scary movies. The top slasher parodies feat...
#25 of 31 The Funniest Comedy Movies About Aliens 2.1k VOTES Earthlings don't know much about aliens, but if movies have taught audiences anything it's that they can be hilarious. ...
#5 of 20 The Worst Title Lines Spoken in Film 1.5k VOTES There’s nothing worse than when you’re watching a movie and an actor comes along to deliver a titular line, i.e. the title o...
#353 of 567 The Greatest Sci-Fi Movies of All Time 549.3k VOTES What are the greatest sci-fi movies of all time? Science fiction films are among the most popular movies in cinematic h...
#10 of 161 The Best B Movies of All Time 29.3k VOTES   A list of all the best b-movies ever made, many of which are streaming on Netflix and Amazon Prime. Check out which...
#132 of 214 The Best PG-13 Horror Movies 28.1k VOTES You've found the only list you'll ever need when it comes to PG-13 horror movies that are ranked from best to wors...
#113 of 161 The Best '80s Horror Movies 104.3k VOTES This list of the best 80s horror movies is a lengthy one, with good reason. The 1980s were a phenomenal decade for horror fi...
#50 of 179 The Best Comedy Horror Movies, Ranked 30.1k VOTES Funny horror movies! This is a list list of some of the best comedy horror movies ever made, or horror comedies. Either way ...
#7 of 20 20 Movies to Show Your Kids to Get Them into Horror 17.3k VOTES It's perfectly natural to want to share your interests with your kids, but what if you're a horror buff with a stockpile of&...
#42 of 90 The Funniest Horror Movies Ever Made 50.6k VOTES There’s nothing better than a ridiculous comedy horror movie. Whether it’s for a date night or just a timekiller, the funnie...
#74 of 209 The Best Classic Horror Movies 83k VOTES If you’re a true horror film enthusiast then you’ll recognize these famous directors and the movies that earned them worldwi...
#45 of 47 The Best Movies About UFOs 4.4k VOTES Nothing is more fascinating and horrific than the thought of life on another planet coming down and invading the earth in a ...
#30 of 56 The Best Alien Invasion Movies 7.6k VOTES A list of the best alien invasion movies ever made, ranked by movie fans with film trailers when available. This alien invas...
#5 of 36 The Best Campy Horror Movies, Ranked 1.7k VOTES Horror movies can be truly terrifying, but shoddy special effects and poor acting often turn films meant to be terrorizing i...
#16 of 40 The Best Alien Movies of the '80s 2k VOTES These best 1980s Alien movies are absolutely out of this world. With so many classic alien movies from the 80s to choose fro...
#49 of 49 The Best PG-13 Horror Comedies 2.9k VOTES List of PG-13 horror comedies, ranked from best to worst with movie trailers when available. This list takes the best PG-13 ...
#24 of 35 The Funniest Movies to Watch Drunk 456 VOTES It's happened to all of us. You come home after two respectable drinks at the bar, only to realize you've still got a whole ...
#15 of 16 The Best PG-13 Alien Movies 211 VOTES List of PG-13 alien movies, ranked from best to worst with movie trailers when available. This list takes the best PG-13 ali...
#32 of 42 The Best Sci-Fi Movies for 13 Year Olds 688 VOTES This list of sci-fi movies for 13 year olds finds the sweet spot. This list has movies that are edgier than say WA...

Killer Klowns from Outer Space is also found on...